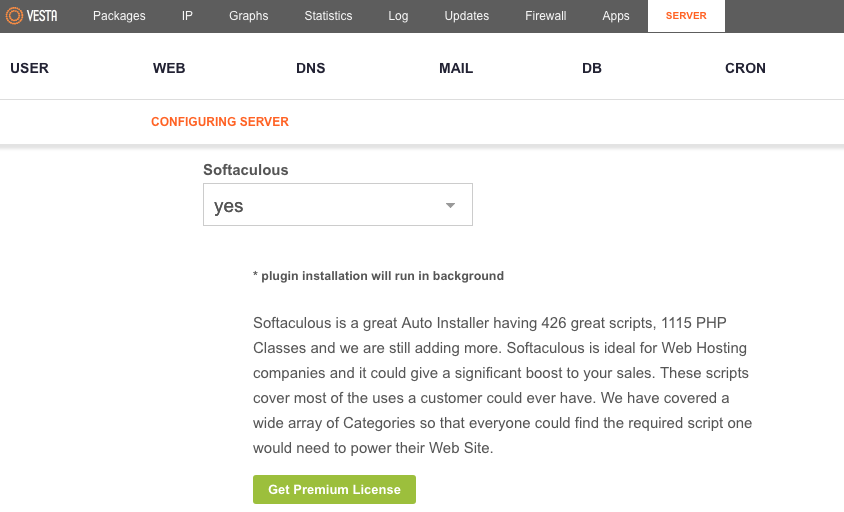 Afer a very long break, I can tell you that vesta released a new version! FINALLY! This update is many times rescheduled, but 29 December it finally arrived. With 1478 commits and 141 merged pull requests, Many fixed bugs or improvements. Less new features in this version.

The only new feature is the softaculous integration. Softaculous is a software package that is used to install popular content management systems, frameworks, etc. automatically. In the free softaculous version your users can install 55 tools. For me personal the free version is not enough, it doesn’t support the popular tools like WordPress, Drupal, … only less know tools. So, In my opinion, the free version is not enough. The premium version starts at $1.5 per month for a VPS, so that is only a small investment.

The vesta team has made it easy to install softaculous, you can do it in the control panel under Server -> Configure -> Vesta Control Panel Plugins. It starts a script in the background with no interaction with the front-end so you don’t know when the installation is finished, it can take a while. Maybe it is better to install it over ssh with the v-add-vesta-softaculous command. This command gives you a detailed view what is happening on your server so you exactly know when it is completed.

After the installation,  you see the Apps menu item in the top menu bar of your vesta CP. When you click on this, you see all the popular scripts to install, also the scripts that are only available in the premium version. This is a confusing for the clients. So you almost forced to upgrade to a premium license.

When I tried to install one of the free scripts, It was straightforward to do. You can select the domain in a select box, you can choose to place it in a subdirectory if you want and it automatically creates a database in vesta CP.

The things what I do not like on softaculous is that all the scripts are present also when they are premium. And the UI is entirely different than the vesta CP UI. Besides that, it is easy to use.

I think the most commits where to update the templates. Many bugs in the templates where fixed. Also, the Let’s encrypt support is improved and many more fixed issues.

In the next coming release which will probably arrive at the end of March (Everyone knows that this might take a little longer 😉 ). You can expect.: Cloud backup integration (AWS S3, Google Cloud, …), Exim relay support for SendGrid, Mailgun, etc. Additional server monitoring tools, IPV6 support and Amazon Linux Support.

I already created some POC with extra new features for Vesta CP, but I need more time to complete this options like Plugin Integrations, Let’s encrypt for the control panel, etc.